Yuria (ユリア, Yuria)
Yuria is first introduced as the missing fiancée of protagonist, Kenshiro, who was taken away from him by a jealous rival. Later in the series, it is revealed that she is part of the Nanto Seitō Kettō (南斗正統血統) bloodline and resurfaces as the Last General of the Nanto Roku Seiken. Although she is Kenshiro's fiancée, Yuria was loved by several other characters in the series such as Kenshiro's older brothers, Raoh and Toki, Ken's rival, Shin, and Yuria's half-brother, Juza.

Yuria is a major character in most incarnations of the Hokuto no Ken metaseries and is the main character of her own single-volume spin-off manga, Yuria Gaiden: Jibo no Hoshi by Akimi Kasai.

In the original manga

One year prior to the present events of the manga (after the death of Kenshiro's father, Ryuken), Kenshiro was confronted by Shin, of the Nanto Koshū Ken school, who desired Yuria for himself. After Kenshiro was defeated, Yuria was strong-armed into swearing her love for Shin under the condition that he spared the tortured Kenshiro, an event which left Kenshiro with the iconic seven scars on his chest. For the following year, Yuria remains by Shin's side, praying for Kenshiro's return. She resides at the city of Southern Cross, the stronghold of Shin's KING organization and a failed tribute built for Yuria in order to claim her heart. Yuria finally despairs at the violence and plunder committed by Shin and his men, and throws herself from the palace balcony to bring the madness to an end, unaware that Kenshiro survived his ordeal and searches for her. However, her life is saved by the Nanto Goshasei who arrive at Southern Cross to rescue Yuria from Raoh's impending invasion. Accepting that he cannot protect Yuria from Raoh, Shin entrusts her life to the Goshasei and assumes the role as her murderer to deceive Raoh and settle the score with Kenshiro.

After the Southern Cross arc, Yuria only appears in flashbacks involving Toki and Raoh before her reappearance. Toki mentions that not only Kenshiro and Shin loved Yuria, but also himself and Raoh. Likewise, Yuria's brother, Ryuga, challenges Kenshiro in honor of his (assumed) deceased sister.

Kenshiro and Raoh eventually learn of the Last General's true identity and race towards the Nanto Capital to meet her. Raoh reaches Yuria first and escapes to his castle with her in his clutches. Learning that Yuria is dying from a similar sickness that took his brother Toki, Raoh places Yuria in a false state of death and takes her body to the Hokuto Renkitōza, using her as bait to lure Kenshiro into their final battle. After the fight, Yuria awakens from her coma and finds her life expectancy has been extended thanks to Raoh's intervention. She travels with Kenshiro into the horizon to spend their few remaining years together in peace.

After the time-shift for the second half of the manga, it is revealed through a posthumous flashback how Yuria and Kenshiro happened upon Shouki's village. When Kenshiro disposed of the bandits raiding the village, Shouki allowed them to live there, as Yuria was in no condition to continue travelling. There she spent her remaining days with Kenshiro until sickness took her.

Yuria was voiced by Yuriko Yamamoto in the Hokuto no Ken animated TV series which aired between 1984 and 1988. She was voiced by Mary Elizabeth McGlynn under the pseudonym "Melissa Williamson" in Manga Entertainment's English dub of the first 36 episodes. The TV series differs slightly from the manga, as the early episodes of the series expand Yuria's role in the initial Southern Cross story arc, fleshing out her captivity in Shin's palace. She does not jump from Shin's palace until sometime prior to episode 22 (the final battle between Kenshiro and Shin), a scene which occurs while Shin's city has been set ablaze. Her role later in the series does not deviate much from the original manga. For reasons unknown, her hair color in the series changes from auburn prior to being captured by Shin, to pale violet when with Shin, and then golden when she returns as the Last Nanto General.

In the Hokuto no Ken (1986 movie), Yuria was once again voiced by Yuriko Yamamoto and by Melodee Spevack in Streamline Pictures' English dub version. As in the original manga and TV series, Yuria is forced to become Shin's lover following Kenshiro's defeat by Shin at the start of the film. The movie deviates from its source material as the story progresses: Yuria realises Kenshiro is still alive, thus preventing her from taking her own life. While Shin is preparing for his battle against Raoh, Yuria finds a secret passageway that leads out of the castle. But is soon captured by Raoh after he invades Southern Cross and defeats Shin. Raoh imprisons her in the dungeon of Cassandra, using her as bait to lure Kenshiro. She manages to free herself during the final battle between Kenshiro and Raoh, but disappears shortly afterwards (she is last shown with Bat and Lin). Kenshiro sets out to find her after the battle and her ultimate fate is left ambiguous to the viewer.

Yuria is portrayed by Yuriko Ishida in the five part Shin Kyuuseishu Densetsu. She first appears in the 2007 OVA Yuria Den, where she is the central focus. Yuria Den tells the story of how Yuria inherited the position of Last Nanto General from Dharma. She also appears in the theatrical movie Raoh Den Gekitou no Shou, a modified retelling of Kenshiro's final battle with Raoh from the original manga and has a bit role in the 2008 OVA Toki Den. In Kenshiro Den, the final film of the series, it is strongly implied that she is now pregnant with Kenshiro's unborn child, making the lone warrior a father in this continuity.

Yuria, as she reappears in the manga. 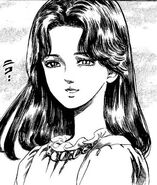 Yuria in the anime

Yuria, as depicted in the anime. 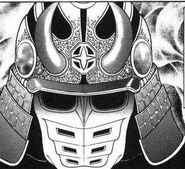 Yuria as the last Nanto General. 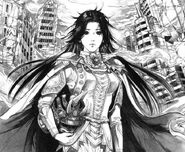 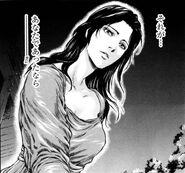 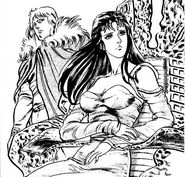 Yuria in her last moments. 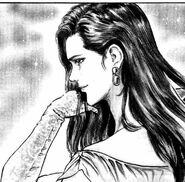 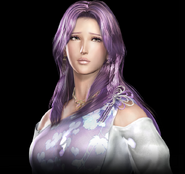 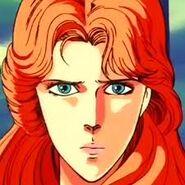 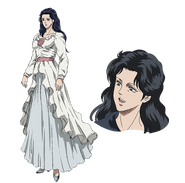 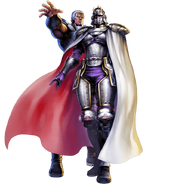 The Last Nanto General and Rihaku in Hokuto no Ken: Legends ReVIVE (illustration)
Add a photo to this gallery
Retrieved from "https://hokuto.fandom.com/wiki/Yuria?oldid=29129"
Community content is available under CC-BY-SA unless otherwise noted.