Yuda (ユダ, Yuda)
Yuda (also romanized as Juda) is the successor of Nanto Kōkaku Ken (南斗紅鶴拳, South Dipper Crimson Crane Fist) style and one of the Nanto Rokusei Ken (Six Holy Fists of Nanto). He bears the destiny of the "Star of Enchantment/Beauty" (妖星, Yōsei), which is also referred to as the "Star of Betrayal/Deception" (裏切りの星, Uragiri no Hoshi).

Yuda is infamous among the Nanto Rokusei Ken for betraying them in order to ally himself with Raoh, taking 27 subordinate branches of Nanto Seiken with him. It was later revealed that Yuda was manipulated by Souther into doing so, knowing that this would plunge the Nanto Rokusei Ken into chaos. His treachery extends to ally and enemy alike; he has no qualms about sending his men against a far superior foe as part of a plan, nor of using dirty tricks to gain the advantage in a fight.

Yuda's treacherous streak is only matched by his supreme vanity. He keeps a harem of concubines who are forced to worship his beauty, who he gives to his men when he considers their use expired. Although cunning and skilled in his chosen art, Yuda's obsession with beauty often works against him; he flies into a blind rage if his appearance or skills are mocked, and he can be immobilized with awe by techniques that exceed the beauty of his own.

It was eventually revealed that Yuda kidnapped Mamiya on her 20th birthday, murdering her parents before her very eyes and making her part of his harem, until she eventually escaped. When Rei discovered this, he challenged Yuda to avenge Mamiya's honor. Yuda himself, was nursing a deep-seated hatred towards Rei, feeling that Rei's beautiful Nanto Suichō Ken had overshadowed his own fighting style even before the nuclear apocalypse.

Aware that Rei had only days to live after his fight with Raoh, Yuda used his wiles to avoid confrontation until he believed Rei was on the brink of death. However, Rei's life was extended by Toki, making Yuda no match for his revitalized strength and spirit. Not to be outdone, Yuda had his minions destroy the dam in Mamiya's Village, using the flood to restrict Rei's graceful footwork and leave him vulnerable to Yuda's long-range attacks. Yuda appeared to have turned the tables until Kenshiro interfered with this scheme, sealing the dam with a massive piece of rock which allowed Rei to perform Hishō Hakurei and finish the fight.

After his defeat, Yuda confessed his feelings of envy and admiration for his rival before mortally wounding himself by stabbing Rei's hands into his own chest. He then concedes that Rei was always the stronger and more beautiful fighter, expiring (by his own request) in Rei's arms.
After many years, Mamiya's Village Elder sculptured a statue of him in a cave along with other deceased Nanto warriors in their honor, but Falco (Solia in the anime) destroyed all of them and killed the Elder in the process.

In the spin-off, Rei Gaiden, we are introduced to a young Yuda after he has been named Nanto Kōkaku Ken successor, seeing the beginning of his rivalry with Rei. He baits Rei into a fight, which is interrupted by Rofu, and later plots Rei's demise with Amiba, who wishes to become Nanto Suichō Ken's successor. Yuda's heart is stolen after witnessing Rei's Hien Ryūbu at the Cliff of Darkness.

After the nuclear war, Yuda launches a siege on the city of Asgarzul, but his thousand-strong army is annihilated single-handedly by Rofu. Yuda is left licking his wounds, but reappears at the Nanto Seitoden with the rest of the Nanto Rokusei Ken to watch Rei's battle with Rofu.

In the 2013 anime adaptation of DD Hokuto no Ken, Yuda makes an appearance in the episode "The Girl Who Wants to Get Married, Love is Confusing". He interrupts a fight between Ken and Rei to proclaim his love and affection towards the latter with a lavish song and dance. After Rei rejects his advances, Yuda kidnaps Mamiya with the intention of throwing her off of a skyscraper. Yuda's plan backfires however, as both he and Mamiya fall from atop of the building after Yuda loses his balance due to seeing Mamiya's "real" face. At the end of the episode the narrator chimes in that Rei would go on to marry Yuda. The two's marriage would become a topic of conversation during Mamiya's wedding with Galf in a later episode titled "Yodele-Rei Yodele-Rei! Rei, Take Back the Love".

Yuda appears as a playable character in Hokuto no Ken (arcade), Ten no Haoh, Shin Hokuto Musou, and Hokuto no Ken: Legends ReVIVE.

Yuda also makes an appearance in the 2018 video game, Hokuto Ga Gotoku, in the form of a talisman. Equipping the talisman comes with a gamble, as it can either increase or decrease the Player's attack and defense power based on chance.

Yuda betrayed the Nanto Rokusei Ken and allied with Raoh.

Yuda, the 'Star of Enchantment'

Yuda in Ten no Haoh

Juda with Dagar and Komaku in the Arc System Works fighting game. 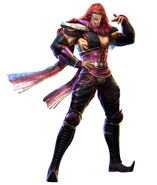 Yuda as seen in the TV series. 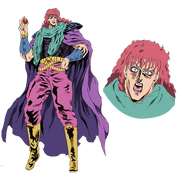 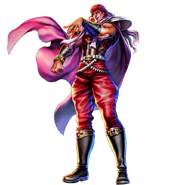 Yuda in Hokuto no Ken: Legends ReVIVE (illustration)
Add a photo to this gallery
Retrieved from "https://hokuto.fandom.com/wiki/Yuda?oldid=29099"
Community content is available under CC-BY-SA unless otherwise noted.