In the spin-off prequel, Uighur was originally a prisoner of Cassandra who had survived five separate executions until his meeting with Raoh. Raoh gauges his strength and learns of Uighur's dream to create his own legend. This earns Raoh's approval and Uighur is named the new Warden of Cassandra, at Gion's expense.

Uighur's cruel and bloody reign built a legend of terror at Cassandra, as he reveled in the screams of the tortured souls locked within its walls. Uighur stood before Kenshiro, who had stormed the prison to free the imprisoned Toki. He managed to overwhelm Kenshiro with his true form, Moko Hakyoku Do (蒙古覇極道, "Tao of the Mongolian Champion"), a charging tackle which concentrates all his muscle and strength into one shoulder. However, Kenshiro recovered and countered the move by crushing Uighur's shoulder with Hokuto Koretsu Ha, before finishing him with the Hokuto Hyakuretsu Ken. Uighur was sent crashing into an unmarked grave that he had originally dug for Kenshiro, his gargantuan body contorting itself to fit inside before Uighur explodes. Somehow Uighur survives long enough to rise up from his grave and issue a final warning that Kenshiro and Toki mustn't meet, before the rest of his mutilated body finally explodes.
In the anime adaptation, Uighur has an assistant warden, Targel who comes with a plan to pit the prisoner Bella against Kenshiro. Uighur's death scene is changed so ne longer says "UWARABA" instead saying "Lord Ken-oh." Additionally Uighur says "help me" in the anime, whilst Uighur is defiant to Kenshiro in the manga.

Uighur appears in the movie version as the second-in-command and public executioner of Ken-Oh's army. He fights with Rei at Cassandra, but his whips are foiled and he is sliced into pieces by Rei's Nanto Suicho Ken.

Uighur is a popular boss in the video games for the series and is a playable character on rare occasions.
The Sega Mark III game has Uighur as the first sub boss of level 4 where he is much smaller then the manga. During the level, Uighur's hawk attacks the player. In the Black Belt Localization, Uighur is turned into a ninja in red.
The gameboy fighting game has Uighur as a fighter. The fifth boss in the campaign mode, Uighur is a playable character in the tournament mode. His attacks are his whips and mongolian tackle instead of punches and kicks.
Hokuto No Ken Seikimatsu Kyūseishu Densetsu features Uighur as a one on one boss battle in chapter 4. In the games VS mode, Uighur is unlocked as a playable character if he is beaten in story mode without continues.
Uighur is a character in Hokuto Musō, he functions as a boss in legend mode serving his role in the manga. In Challenge mode and Raoh's dream mode, Uighur may function as an ally character.
Uighur plays effectively the same role in Shin Hokuto Muso.
In the 2018 video game, Hokuto ga Gotoku, Uighur makes an appearance as a non-playable boss character. He suffers the same fate as he does in the manga. 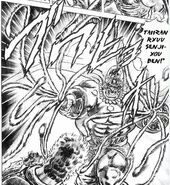 Uighur in Hokuto No Ken 3

Uighur in Hokuto no Ken: Legends ReVIVE (illustration)
Add a photo to this gallery
Retrieved from "https://hokuto.fandom.com/wiki/Uighur?oldid=29097"
Community content is available under CC-BY-SA unless otherwise noted.