Toki (トキ, Toki) is the second of the four Hokuto brothers, Toki is a pacifist who seeks to use Hokuto Shinken as a healing art. Toki's self-made technique of Hokuto Ujō Ken (北斗有情拳, "Big Dipper Humane Fist") is adept at both healing and destroying. When using this style, his adversaries experience intense ecstasy before their deaths, instead of horrifying pain. According to Kenshiro, Toki had the most elegant style of the four brothers and was the ideal successor to Hokuto Shinken before his illness.

Toki, along with Raoh and Kenshiro, is originally from the Land of Asura, where he has two additional blood siblings named Kaioh and Sayaka. Toki and Raoh are actual blood brothers and were orphaned when they were children only to be adopted by Ryuken, who was seeking a student to train. Originally, Ryuken only trained Raoh, while Toki watched on. When a hunter killed Toki's pet dog Koko, Toki demonstrates his fighting ability by pummelling the hunter relentlessly. Realizing that Toki has learned to fight by merely watching his brother, Ryuken began training Toki as well. During this time, Raoh made Toki promise that if he should ever lose his way, Toki would try to stop him.

During the nuclear war, Toki was exposed to the nuclear fallout while force-shutting the jammed doors of the bomb shelter to protect Ken and Yuria. Toki survived for two weeks without food and water, but the nuclear exposure turned his hair white and left him terminally ill. Therefore, Toki renounces the succession to the Hokuto Shinken style and becomes a wandering doctor, easing the people's ills with the time he has left.

Toki wanders into a village ravaged by disease and uses his powers to heal the sick and lame. The village becomes known as the "Village of Miracles" and Toki is worshipped as a messiah. However, Toki is taken captive by Raoh's army and imprisoned at Cassandra, while Amiba impersonates him in an attempt to destroy Toki's reputation after a previous confrontation.

Kenshiro rescues Toki from the prison stronghold and the two join forces against Raoh. Toki intervenes during Kenshiro and Raoh's first clash at Mamiya's village, as the battle draws to a bloody standstill. After the death of Koryu, Toki attempts to fulfil his childhood promise and prevent Raoh from using Hokuto Shinken for his own selfish ends. Despite a heroic effort, Toki finds himself deprived of the strength to pierce Raoh's vital points. Raoh takes pity on his little brother's fate and spares his life. Toki spends his few remaining days healing the sick until an encounter with Ryuga leads to his end. Before Kenshiro can deal a finishing blow on Ryuga, Toki suddenly appears, and reveals that Ryuga had already dealt a fatal blow to himself by cutting his stomach before the fight, leaving him mortally wounded. Toki tells Kenshiro to "turn sorrow into anger". Toki would later accept his death by directly gazing at the Death Omen Star, dying shortly afterwards.

Toki's self-styled Jū no Ken (柔の拳, Gentle Fist) turns the opponent's power against them with effortless grace and dexterity. His style focuses on destroying the opponent as they experience immense ecstasy while dying. He was also arguably the most knowledgeable of Hokuto Shinken's therapeutic aspects out of the four brothers. It's because of this natural talent that Toki was originally the favored successor to Hokuto Shinken.

During his showdown with Raoh, Toki revealed knowledge of Raoh's Gō no Ken (剛の拳, Strong Fist), having sealed its power away until such time. However, Raoh realizes that Toki, has in, fact pressed the Sekkatsu-kō vital point, temporarily boosting his strength in order to imitate his brother's style. He was capable of temporarily counter Raoh's technique by using a "calm current" approach to Raoh's "strong current", thereby neutralizing it.

Toki had inhuman levels of endurance, being able to survive under nuclear radiation without food or water for weeks. Although he suffered after-effects that left him sick and with white hair, Toki would still be able to live for years after the incident. Despite his ailing health, it is noted that his technique remained unaffected until his sickness reached its peak. Although he was a miraculous doctor through his technique, he could not cure himself from the effects of radiation. 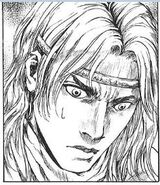 Toki and his brother, Raoh. 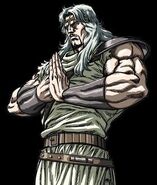 Toki in Ten no Haoh 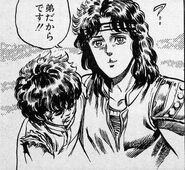 Young Toki in Shirogane no Seija.

Young Toki in Ten no Haoh 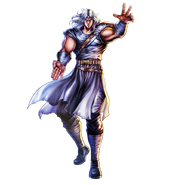 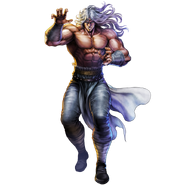 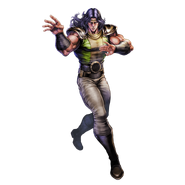