Ten no Haō: Hokuto no Ken: Raō Gaiden (Japanese: 天の覇王 北斗の拳 ラオウ外伝, roughly translated as "The Conqueror of the Heavens: Fist of the North Star the Story of Raoh") is a manga series by Youkow Osada that was serialized in the Weekly Comic Bunch from 2006 to 2007. It was adapted into a 13-episode anime series produced by Satelight, which aired on Tokyo MX from October to December 2008. The anime was licensed for North American by Sentai Filmworks and distributed by Section23 Films under the title Legends of the Dark King: A Fist of the North Star Story. The complete series was released on a DVD set on September 15, 2009.[1]

This story is a spinoff prequel to the original Fist of the North Star by Buronson and Tetsuo Hara, and covers the events of Raoh's life prior to his appearance in the manga. This includes how he became known as Ken-Oh (拳王, King of Fists) and conquered the wasteland.

Ten no Haoh was serialized irregularly in the Weekly Comic Bunch from Issue 231 (March 24, 2006) to 300 (August 24, 2007), lasting a total of 42 chapters (including a two-part epilogue), which were subsequently collected in five tankōbon editions. A two-part special chapter was published in 2008 in the September 12 and September 19 issues of Weekly Comic Bunch as a tie-in to the anime series. 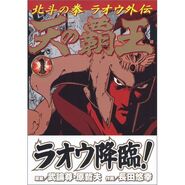 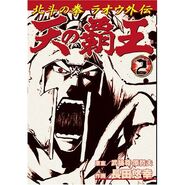 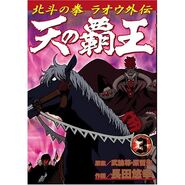 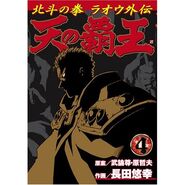 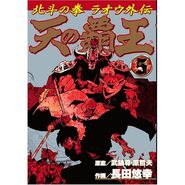 Ten no Haoh Volume 5
Add a photo to this gallery

The anime version of Ten no Haoh, directed by Masashi Abe, aired in Japan on Tokyo MX and other channels from October ― December 2008, lasting 13 episodes. The opening theme Nageki no Endless (嘆きのエンドレ) is performed by jealkb, and the ending theme Namida no Kawa (ナミダノカワ) is by minamuse. The series is currently being released on Region 2 DVD in six volumes, with the first volume having been released on January 2009. 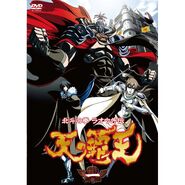 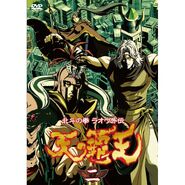 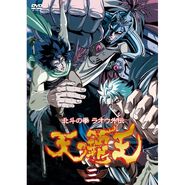 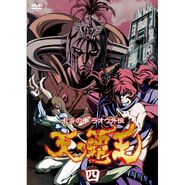 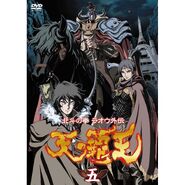 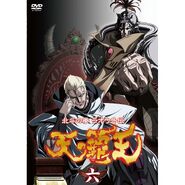 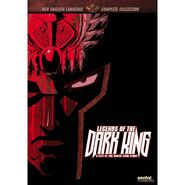 A web novelization of Ten no Haoh was published in the Hokuto no Ken DX mobile phone site, lasting six chapters.

The Ten no Haoh video game was produced by Interchannel and released for the PlayStation Portable in Japan on January 22, 2009. It is a cel-shaded fighting game featuring 13 playable characters from the manga and anime, including Kenshiro as a hidden character.

Retrieved from "https://hokuto.fandom.com/wiki/Ten_no_Hao?oldid=25154"
Community content is available under CC-BY-SA unless otherwise noted.