Spade (スペード, Supēdo)
The first of Shin's minions that appears in the manga. When Kenshiro first confronts Spade, the rogue is after Misumi's rice seeds, which results in the loss of Spade's right eye when Kenshiro uses the Nishi Shinku Ha to deflect an arrow from Spade's bowgun back at him.

Later he attacks Misumi's village in retaliation for his earlier defeat. Kenshiro hurries back to the village but is too late to save Misumi from Spade who kills the man and eats his seeds. Kenshiro fights Spade and kills him with the Hokuto Zankai Ken (Fist of Remorse), giving him three seconds (seven, in the anime) to reflect on his sins before he explodes.

In the anime series, he is referred as the Jack of Spades, along with King's other three lieutenants from the manga.

Spade is the most common of Shin's four generals to be seen in video games after Mr Heart.

Rather then Spade, Zeed in Hokuto no Ken 3 takes Spade's role of stealing Misumi's seeds. Spade himself appears as an optional encounter in KING palace where his special attack is firing his crossbow.

In the sega master system game, Spade is a miniboss who attacks with thrown axes. In the Black Belt localization for overseas, Spade becomes a Kung fu master and his sprite is given a Kung Fu uniform.

The playstation game for the series Spade is the second boss, attacking wth his bowgun and his own fists. In the first encounter with Spade, there is a timelimit before Spade's minion reaches Misumi. If the minion reaches Misumi, the second encounter with Spade is skipped and the game jumps to Bat trying to sneak into KING's palace. Spade and Heart are the only generals of KING to appear.

While Spade doesn't appear in the first Hokuto Muso, the playable DLC character, Outlaw, draws heavy inspiration from Spade. Besides using similar weaponry such as a crossbow, one of Outlaw's techniques, Better Today than Tomorrow, has him knock down the opponent making them drop their seeds, put his heel on his opponents back and eat the seeds himself. This identical to how Spade ate Misumi's seeds.

In the sequel, Shin Hokuto Muso, Spade himself appears as a boss character in Legend Mode where he uses dual maces with a crossbow. In Shin's dream mode, Spade, then simply called Brute, is recruited by Shin in chapter 6. In chapter 7, Spade acts as an AI ally character who helps hold off Raoh's forces from reacing Yuria. Like the PS1 game, Heart and Spade are the only Kingsmen to appear.

According to Life is Offside, Spade was once a soccer player aspiring to move onto the big leagues. Once the apocalypse struck resulting in the loss of Spade's pre war lifestyle, Spade threw away his morals and decided to use his athletic build to his advantage.

Spade and his gang.

Spade as he appears in the anime. 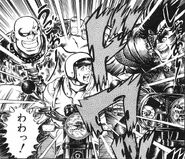 Spade in Hokuto no Ken 3 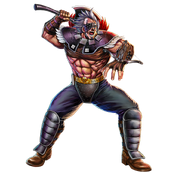 Spade in Hokuto no Ken: Legends ReVIVE
Add a photo to this gallery
Retrieved from "https://hokuto.fandom.com/wiki/Spade?oldid=28535"
Community content is available under CC-BY-SA unless otherwise noted.