Shuren of the Flames (炎のシュレン, Honō no Shuren)
Shuren is a member of the Nanto Goshasei and leader of the Crimson Army. He uses a unique martial art which manipulates phosphorous to engulf enemies with deadly flames.

After the death of Huey, his "brother star", Shuren mobilizes his Crimson Army against Ken-Oh's forces to take his revenge. Shuren preemptively ambushes Ken-Oh's army with flaming arrows as they enter a valley.

Afterwards, Shuren fights against two of Ken-Oh's most disciplined warriors before challenging their leader. Learning from Huey's mistake of fighting Raoh head-on, Shuren blinds Raoh with fire and manages to attack him from behind but Raoh reacts in time, crushing Shuren's fist and shattering his follow-up kick. In a last-ditch effort to stop Raoh reaching the Last Nanto General, Shuren performs a self-immolating attack. This proves futile against Raoh, who declares that Shuren's flames will never consume his ambition, and brutally snaps his neck.

In the anime series, Shuren holds a funeral pyre for his fallen comrade, Huey, by torching his castle to ensure there is no turning back for him and his army in their upcoming battle with Ken-Oh. He also fights against one of Ken-Oh's invasion forces before challenging the main army.

In the Legend of Yuria OVA, Shuren teams up with Fudo and Huey to successfully capture Rei for the Last Nanto General.

Legend of Raoh: Fierce Fighting features a shortened version of Shuren's fight with Raoh. He launches a fireball at Raoh before flying at him head-on. Raoh easily deflects the attack, causing Shuren to explode into flames.

Shuren in the anime 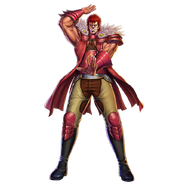 Shuren in Hokuto no Ken: Legends ReVIVE (illustration)
Add a photo to this gallery

Retrieved from "https://hokuto.fandom.com/wiki/Shuren?oldid=29101"
Community content is available under CC-BY-SA unless otherwise noted.