Shu (シュウ, Shū)
The successor of the Nanto Hakurō Ken (南斗白鷺拳, "South Star White Heron Fist") style and one of the Nanto Roku Seiken. He carries the burden of the Star of Benevolence (仁星, Jinsei), who is destined to serve and protect the future generation.

Shu was originally Souther's second-in-command and was present during young Kenshiro's battle at the Nanto Junin Kumite. Raoh had brought Kenshiro to the Nanto dojo in order to test his ability, where he would have to defeat ten Nanto opponents or be killed. When Kenshiro reacted to Shu's ki, Shu volunteered to be the final opponent and handily defeated the boy. However, realizing that Kenshiro's potential would outshine them all, Shu's Star of Benevolence was awakened and he defied Souther's orders to execute the boy, clawing out his own eyes in exchange for Kenshiro's life. Shu carried the young Kenshiro from the temple and from that day forth learned to see with his heart.

After the nuclear war, Shu leads a resistance movement against Souther, saving the children of the wasteland from the Holy Emperor's wrath. When Kenshiro is beaten and imprisoned by Souther, Shu's young son, Shiva, sacrifices his life to rescue him. The guerilla hideout is then sieged by Souther and his troops in retaliation. With Kenshiro still unconscious while recovering from his wounds, Shu arranges his escape before challenging Souther himself. Souther slices the tendons in Shu's legs, crippling his Nanto Hakuro Ken, and forces Shu to carry the capstone of Souther's Holy Pyramid in order to protect the hostages.

Shu dies resting the capstone, but before his death he miraculously recovers his eyesight and witnesses the grown-up Kenshiro for the first and last time. When Souther is defeated by Kenshiro, the summit of the pyramid leaks Shu's blood, causing it to collapse under the weight of his sorrow. 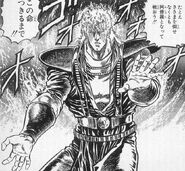 Shū, before losing his eyesight

Shū regains his eyesight moments before his death

Shū mourns the loss of the children who fought Souther. 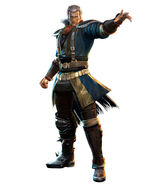 Shū after clawing his eyes out. 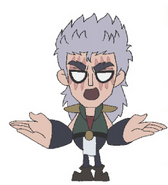 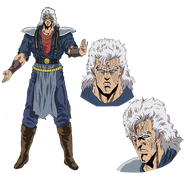 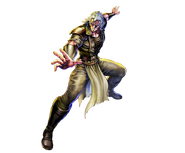 Shū in Hokuto no Ken: Legends ReVIVE (illustration)
Add a photo to this gallery
Retrieved from "https://hokuto.fandom.com/wiki/Shu?oldid=29625"
Community content is available under CC-BY-SA unless otherwise noted.