Shachi (シャチ, Orca)
A foreigner to the Land of Asura, he is the son of Akashachi, a pirate who befriends Kenshiro. When he was a child, he was left behind at the Land of Asura after his father's crew were attacked and slaughtered by the Nameless Asura. He had the opportunity to leave Asura, but decided to stay in order to protect his girlfriend, Leia. Shachi learned Hokuto Ryūken under Jūkei, believing that he couldn't wait for the "saviour" to arrive. Shachi lost his humanity when he learned this forbidden art until he met Lin, whom he originally planned to use to lure Kenshiro and use him to defeat the three Rasho.

He became feared across the land as Rakshasa (羅刹, Rasetsu), the Asura-devouring beast". To keep his identity secret, he disguised himself as a Boro (Boros are former Asuran warriors that had their limbs amputated), who served Alf of the Hourglass; and only revealed his identity to those he planned to kill. After Alf's defeat to Kenshiro, he continued to don the Boro disguise to help people in need, usually taking them under the protection of Jukei. However, he also caused the capture of Lin by the hands of Kaioh. In the anime, after the defeat of Han he brings her personally to the first Rasho, while in the manga he "hides" the girl in a location reputed as secret, but then Kaioh storms there kidnapping Lin. Shachi managed to be reunited with his father Akashachi before Akashachi was struck and killed by one of Kaioh's arrows. At one point, he rips out his left eye as an offering to Hyoh to protect an injured Kenshiro and begins to wear his father's eye-patch. He dies from massive mutilation during his battle against Kaioh, dying in Leia's arms. In the anime, he has an upper piece of armor, absent in the manga.

Shachi is a practicioner of Hokuto Ryū Ken being the fourth disciple of Jukei. He has proven himself a very skilled fighter capable of killing many Shura by himself, earning the monicker of Rakshasa, the Asura-devouring Demon, and the fear of many Shura. Although not as strong as Kenshiro or the Rashō, he is more than capable of defeating Gunshō by himself.

Through his martial arts, he is capable of striking pressure points to have enemies' body compress before exploding violently. A tactical fighter, he analyzes his opponents in order to find openings he can exploit, and is also willing to take some damage himself in order to create those chances. Despite his skill, he is largely unable to truly master Hokuto Ryū Ken because he lacks malice in his heart, and thus cannot employ the Matoki which is central to the style's most powerful techniques. 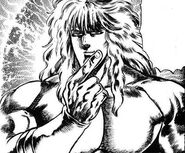 Shachi, disguised as a Boro 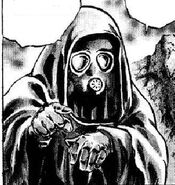 Shachi in the TV series

A young Shachi with Raoh 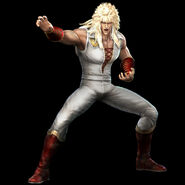 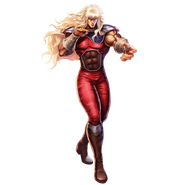 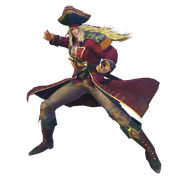