Searching for the kidnapper

When the imposter with Seven Scars killed his parents and kidnapped his sister Airi, Rei abandoned his humanity and roamed the wastelands as a lone wolf, surviving through any means necessary. Rei was hired by the Fang Clan to infiltrate Mamiya's village as one of its bodyguards. However, Rei betrayed them and helped Kenshiro thwart them off, believing it would be wiser to ally with the stronger side. Afterwards, Rei went to the hideout of the Fangs with Ken and Mamiya to defeat their leader. However, the Fangs had managed to capture Airi from her previous captors and used her as leverage to coerce Rei into fighting Ken for them. Rei and Ken managed to trick the Fang Clan by striking each other's vital points at the same time, placing both of them in a temporary false state of death. After the Fang Clan was defeated, Rei was reunited with his sister.

Rei would become one of Kenshiro's most trusted allies. He exposed Amiba's true identity at the Village of Miracles and accompanied Kenshiro to the city of Cassandra, where the real Toki was imprisoned. Although Toki was saved, Rei was forced to rush back to Mamiya's village when he learned that Ken-Oh's army was on the move. Rei fought the leader of the invasion squad before going head-to-head with Raoh. However, Rei was defeated and struck in the vital point Shinketsushū sentencing him to three agonizing days to live.

After rescuing Mamiya from Medicine City, Rei learned that she was once one of Yuda's captives before she escaped and became the leader of her village. Swearing to avenge Mamiya's honor, Rei dedicated his remaining days to tracking down Yuda. However, Yuda managed to elude his pursuit, leaving Rei's struggle in vain. This was until Toki extended Rei's lifespan for one more day by striking the vital point Shinreidai, which had the side-effect of transforming his hair white from the unbearable trauma it caused. Rei entered the final showdown with Yuda, and after a treacherous fight, he triumphed with the technique Hishō Hakurei, the Soaring White Splendor. After the battle, Rei tells Kenshiro to live on as the hope of the new world before spending his final night alone in a hut to spare his loved ones from his gruesome death. Afterwards, Kenshiro ignites the hut as a funeral pyre for his fallen friend.

In Rei's sidestory taking place before the events of Hokuto no Ken, he is searching the wastelands for his sister and for the man with Seven Scars when he encounters a young bandit named Yū, and hears about a city called Asgarzul, where many women are taken. Believing that Airi may have been taken there, he goes to Asgarzul, accompanied by Yū. The city is a sanctuary for women, who are often targeted and victimized in the wastelands, where they are free and protected. Rei meets the Queen of Asgarul, Eva, and spends the night with her, only to find her dead the next morning.

Rei is believed to be responsible for her murder, as wounds associated with Nanto Suicho Ken are found on her corpse, and Rei is forced to go on the run from the city's elite guardians, the Valkyries, led by Frieda. Rei is found by Zan, a fellow practicioner of Nanto Seiken, on the West Side of Asgarzul, where Zan works as a bodyguard. Zan reveals his plans to take over Asgarzul and Rei is unable to stop him as he and his men take over the city. Rei is at least able to save the lives of Frieda and the other Valkyries.

Rei eventually discovers from Eva's handmaiden that Yū is a girl, the adoptive younger sister of Eva, who Yū greatly admired and looked up to. When the Valkyries are about to be killed by Zan's men, Rei intervines and again saves them. Zan dispatches Garai and Kepel to kill him, but both are killed, and Zan faces Rei himself. Zan is defeated and dealt a final blow by a mysterious warrior, Rema of Alkaid, who engages in a fight with Rei. Rema demonstrates superhuman strength and speed in his fighting, but the battle is interrupted by the coming forces of Rofū, Rei's master in Nanto Suicho Ken, and Eva's real killer.

The forces of Rofū and Yuda, who also desires Asgarzul, and Rofū singlehandedly wipes out Yuda's army and forces him to flee. Even Rei is easily defeated by him and Rofū takes the city. While Yū is left in the company of Frieda, Rei hears that his sister was taken to a man named Sou and goes to find him. Rei soon realizes that this was a trap to lure him away from the city while Rofū's men took the women who Rei was protecting, including Yū. the princess and heir to Asgarzul.

As Rei heads back to the city, Frieda fights Rofū's soldiers, and reveals to be a biologically engineered human weapon, much like Rema, who arrives on the scene and the two of them fight Rofū. Meanwhile, Rei is confronted by a vengeful Zan in the desert, holding a woman believed to be Airi hostage to keep Rei at bay. Shuh arrives and exposes that the woman is not Airi. Rei then easily kills Zan, and he and Shuh go to Asgarzul, only to find that Frieda and Rema have been defeated and that Yū has been taken by Rofū.

Shuh reveals that the scar on Rofū's face that is hidden by the mask he wears was left there by his wife, Linley, who battled Rofū in a battle on the eve of the nucear war and was killed by her husband.  Rei goes off to confront Rofū, who has taken Yū to the Nanto Seitoden, leaving Frieda and Rema back at the city to recover. Rei and Shuh show up and Rei fights Rofū in a second battle for succession of Nanto Suicho Ken as Yū, the entire Nanto Roku Sei Ken, and even Ken-Oh look on.  Rei battles Rofū with the fist that he had learned from Linley and his style fueled by love for others, led by the Star of Justice, clashes with Rofū's fist of rage. Rei eventually manages to defeat his master with the Hishō Hakurei.  Before dying, Rofū tells Yū that he killed Eva at her request so that he could fulfill his destiny of fighting Rei and so that Yū could have the throne of Asgarzul. Rei and Yū bid their farewells and Yū goes on to be queen of Asgarzul while Rei continues his search.

In the 1986 movie adaptation, Rei is once again searching for the 'Man With Seven Scars' who has kidnapped his sister. He ultimately teams up with Kenshiro and together they confront Jagi and rescue Airi. After Airi's memory and sight are restored by Kenshiro and Lin respectively, Rei watches over Bat and Lin while Kenshiro continues his quest to find Yuria. During this time, the three of them travel to Cassandra where they discover Yuria now in Raoh's clutches. To save Yuria from a public execution, Rei challenges Raoh and is defeated in similar fashion to the series - albeit he is killed almost instantly instead of sentenced to three days to live. With his final breath, Rei implores Kenshiro not to sacrifice his life against Raoh, as there are too many people depending on him to protect them. However, these words only spur Kenshiro on further to fight Raoh. 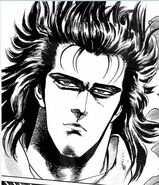 Rei in the Manga.

Rei in the TV series

Rei after surviving Shinreidai as seen in the manga.

Rei after surviving Shinreidai as seen in the TV series.

Rei dedicates the remainder of his life to Mamiya.

Rei, in his final moments.

Rei in Hokuto no Ken (Banpresto) 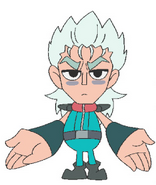 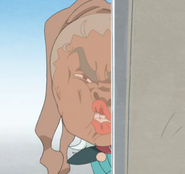 DD Rei with a stocking on his face. 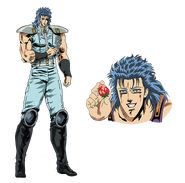 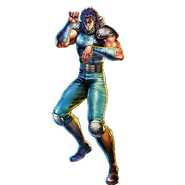 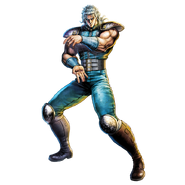 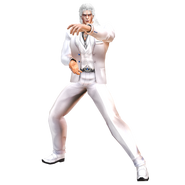 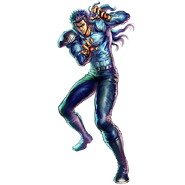