Mako (マコ, Mako)
Mako was a crippled young boy who was supported by his little brother Aki. They lived in a village located near Jagi's hideout. When Mako accidentally bumped into one of Jagi's henchman, Aki offered to sacrifice one of his legs to save him. Enraged by this act of brotherly love, Jagi (who was pretending to be Kenshiro at the time) took Aki away from Mako and left him chained to a giant cinder block in the middle of the desert. When the real Kenshiro arrived at Mako's village carrying Aki's lifeless body, Mako, who was now distraught over Aki's death, attempted to kill Kenshiro with a bowgun. Kenshiro took the arrow to his chest and later used that very arrow as he was torturing Jagi to death.

In the anime version of the story, Mako was established to be ill instead of crippled and was thinner than his manga counterpart. Before taking Aki away from him, Jagi strikes a vital point on Mako that brainwashes him into killing Kenshiro. The only way Kenshiro was able to reverse the effect of Jagi's vital point was to allow himself to be shot by Mako's arrow, since failure to accomplish his task would've resulted in Mako's death. Since Aki does not die in the anime version, the two brothers are reunited. 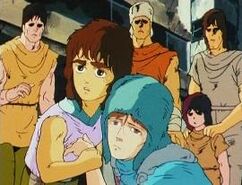 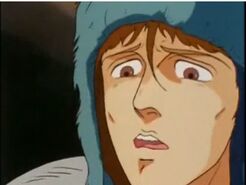 Add a photo to this gallery
Retrieved from "https://hokuto.fandom.com/wiki/Mako?oldid=27394"
Community content is available under CC-BY-SA unless otherwise noted.