Lin was a young orphan who lost the ability to speak after witnessing her entire family being murdered by bandits during the aftermath of the nuclear war of 199X.

In the beginning of the series, she inhabits a small village where she serves prisoners, which is how she meets Kenshiro. He restores her voice using Hokuto Shinken and saves her from Zeed's assault. Lin was never able to forget this act of kindness and followed Kenshiro after he left the village. She falls into the hands of the Golan, who capture young girls to groom for their master race, until Kenshiro saves her once more. Although she is a small girl, Lin displays outstanding compassion and bravery throughout the series, with an unwavering faith in Kenshiro and his ability to save mankind from the horrors of the wasteland.

After the time-skip following Raoh's death, Lin and Bat form the Hokuto Army during Kenshiro's absence, and fight against the oppressive Imperial Army. Lin is revealed to be an adopted child and the twin sister of Lui, the Celestial Empress. Per the precepts of succession, Lin was ordered to be executed by the evil Viceroy, but Falco could not go through with it and her to his remaining family. After Jako and his corrupt regime are destroyed by Kenshiro and Falco, Lin is kidnapped by Jako's son, Jask (Tiger in the anime) and taken to the Land of Shura. Kenshiro rescues her from the demons that await him and tells her to return home to her loved ones. However, Lin's feelings for Kenshiro force her to follow him deeper into the island. Lin is captured by Kaioh, who wishes her to carry his child in order to cleanse the tainted legacy of Hokuto Ryuken. However, failing that, as an act of spite he uses the Shikanhaku (死環白) vital point, which causes the victim to fall in love with the first person they awaken to. As a result, she falls in love with Bat.

In the final volume of the manga, Bat refuses to live a lie and erases Lin's memory with his limited Hokuto Shinken. Kenshiro also loses his memory during a fateful thunderstorm, and Bat arranges for the two to be reunited while he stakes his own life against Bolge, an enemy from Kenshiro's past. Lin and Kenshiro recover their memories, only to find Bat has been mortally wounded in the fight. As a dying wish, Bat tells Lin to spend her life with Kenshiro, the man she loves. Lin respects his wish, only to have a change of heart and return to Bat's side. To her wonder, she finds Bat has survived, thanks to Kenshiro's powers.

Lin's introduction remains relatively faithful to the original manga/television series. After she is saved from Zeed by Kenshiro, Lin and Bat follow him on his journey to find Yuria, until Kenshiro leaves them with Rei. The three of them travel to Cassandra, where they discover Yuria is now in the hands of Ken-Oh. After Rei dies protecting Yuria, Kenshiro arrives and fights Raoh in a violent battle. Lin intervenes at the last second to save Kenshirō's life. Raoh accepts her plea, believing Lin holds a key to the future.

Lin in the original anime

In order to save Airi, Lin bravely fights off a villain. 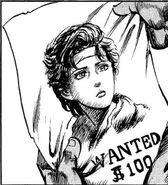 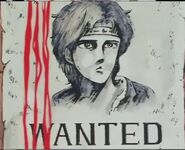 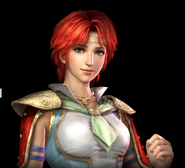 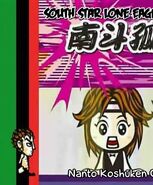 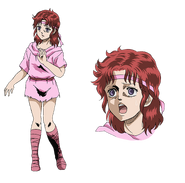 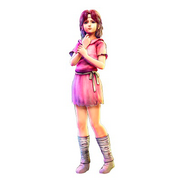 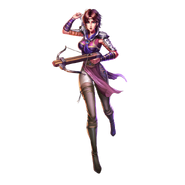 Light of Hope Lin in Hokuto no Ken: Legends ReVIVE (illustration)
Add a photo to this gallery
Retrieved from "https://hokuto.fandom.com/wiki/Lin?oldid=29137"
Community content is available under CC-BY-SA unless otherwise noted.