Kokuoh (黒王, Kokuō, Lit. Black King)
Kokuoh is Ken-Oh's titanic black horse, said to be roughly the size of an elephant. Raoh would use the steed's mighty strength and size to crush those not worthy of dying by his own hand. However, when Kokuoh tried to trample Kenshiro, Kenshiro stood his ground and punched Kokuoh in the mouth to force Raoh into dismounting.

Kokuoh was tamed and stolen by Juza during his battle against Raoh, who refused to move until his trusty steed was returned to him. However, Juza sensed Kokuoh was missing his master, and having stalled long enough, returned him to Raoh. After the battle, Kokuoh mourned Juza's death and signalled for an honourable burial. Raoh fulfilled his wish, acknowledging that Juza was the only other man to have rode him.

After Raoh's death, Kenshiro inherited Kokuoh as his steed. Kokuoh also sported a bandage over his left eye, due to losing it in a bloody battle he and Shoza had with Daruja. Their sacrifice motivated Kenshiro out of retirement. Kenshiro left Kokuoh behind when he journeyed to the island of Shura, but Bat appeared on the horse (alongside Rihaku & the Hokuto Army in the TV series) to help Kenshiro.

Kokuoh returned as Kenshiro's steed but during a fateful thunderstorm (that would rob Kenshiro of his memory), Kokuoh suddenly pulled up and died a peaceful death.

In the spinoff Ten no Haoh, Kokuoh is presented as the leader of a herd of wild horses that ruled their own valley and would trample to death anyone who invaded their territory. Gion tricked one of Raoh's squadrons into entering the valley, where they were killed in a stampede. Raoh, Reina, and Souga went into the valley alone and witnessed Kokuoh fighting off two tigers that had attacked a foal. Raoh confronted Kokuoh and used a vital point to euthanize the suffering foal which earned Kokuoh's respect. Kokuoh and his fellow horses then joined forces with Raoh's army, with Kokuoh becoming Raoh's personal steed. He then received the suffix Gō (号) after his name. 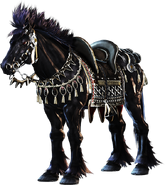 Kokuoh in Hokuto Musou
Add a photo to this gallery

Retrieved from "https://hokuto.fandom.com/wiki/Kokuoh?oldid=28479"
Community content is available under CC-BY-SA unless otherwise noted.