The main character of Souten no Ken and 62nd successor to Hokuto Shinken. Known in Shanghai as Yánwáng (Chinese and Japanese: 閻王; Wade-Giles: Yen-wang; rōmaji: En'ō). Loves smoking cigarettes (because "I bleed easily so it helps to clog up my arteries"), reading, playing the piano, has an excellent sense of smell and a photographic memory. He is also fluent in Chinese, Japanese, German and ancient Hebrew.

The son of Tesshin Kasumi and Liu Yueying and the half-brother of Ramon Kasumi, Kenshiro was born with a Big Dipper-shaped birthmark on his head at the Tàishèng Yuàn (泰聖院 Taiseiin) Temple in Ningbo. Because of this, his mother called him Ā-Xīng (阿星 Star). Kenshiro stayed there until the age of 3.

In Japan, he's a lecturer at the Tōwa Women's University. Depicted as somewhat easy going, as well as comical; compared to his namesake and nephew, Tetsuo Hara describes Kenshiro Kasumi as a combination of the strength of Kenshiro, the good nature of Keiji Maeda from Hana no Keiji and the sarcastic attitude of the title character of Nakabo Rintaro. However, he retains the stoic persona which would be eventually seen in his nephew. He uses the same catch-phrase as his nephew, "You're already dead" (お前はもう死んでいる, Omae wa mō shindeiru), but pronounces it in Chinese, "Nǐ yǐ jīng sǐ le" (traditional Chinese: 儞已經死了; simplified Chinese: 你已经死了; Wade-Giles: ni i ching ssu liao). 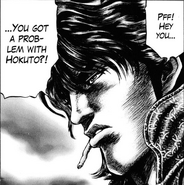 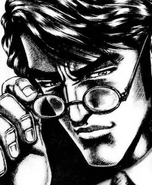 Add a photo to this gallery

Retrieved from "https://hokuto.fandom.com/wiki/Kenshiro_Kasumi?oldid=28741"
Community content is available under CC-BY-SA unless otherwise noted.