Kenshirō (ケンシロウ) (Ken for short) is the main protagonist of the Hokuto no Ken manga, anime and related media. He is the 64th successor of the Hokuto Shinken style and considered one of the greatest successors in its 1,800 year history.

His famous catchphrase "You are already dead" (お前はもう死んでいる, Omae wa mou shindeiru) is delivered to the opponents whom he kills before they even know they're dead.

Kenshiro was originally an orphan from Taiseiden, Shura and a descendent of the Hokuto Sōke bloodline. He was sent to the mainland by Jukei as a baby to be adopted by Ryuken, master of Hokuto Shinken. Ryuken named him after his older brother Kenshirō Kasumi, since they shared the same Big Dipper-shaped birthmark on their heads.

Kenshiro watched his adoptive brothers train in the art of Hokuto Shinken and decided to join them in the fight to become Ryuken's successor. Despite being younger and more naive than his older brothers, Kenshiro was a promising student who ultimately earned the title of successor.

After the nuclear war of 199X and the death of Ryuken, Kenshiro left with his fiancée, Yuria, to find a future for themselves in the post-apocalyptic world. However, this was curtailed by Shin, a rival from the Nanto Koshū Ken school, who defeated Kenshiro and engraved the trademark seven scars on his chest, before kidnapping Yuria for himself.

Kenshiro survived his ordeal and spent the next year wandering the wasteland for revenge. During this time, he developed the killer instinct needed to survive in the war-torn age and befriended two young orphans, Bat and Lin, who followed him on his journey. He discovered that Shin had assumed the title of 'King' and was leader of the eponymous KING organization. After defeating Shin's four generals ('Four Jacks' in the anime), he infiltrated his capital city, Southern Cross, to settle things once and for all. Driven by his new strength, Kenshiro soundly defeated Shin but he was too late to rescue Yuria. Before his death, Shin revealed that Yuria had already committed suicide to stop his violent ambition. Refusing to die from Kenshiro's technique, Shin leapt to his death from his palace balcony, as Yuria did before him.

Kenshiro continued to roam the wasteland, never staying at one place for long, as the curse of Hokuto leaves only chaos in its wake. He made a career of destroying those who preyed on the weak and innocent, such as Golan, Jackal and the Fang Clan, which earned him a reputation as a savior among the people. He also discovered that his three older brothers and fellow Hokuto Shinken practitioners: Jagi, Toki and Raoh, had all survived the nuclear holocaust. Jagi, the second-youngest, had long hated Kenshiro and was now committing acts of carnage in his name. It was also revealed that Jagi manipulated Shin into taking Yuria, as well as murdered Rei's parents and abducted his sister. Kenshiro caught up with Jagi and subjected him to a gruesome death. Afterwards, Kenshiro fought against his second-oldest brother, Toki, who had succumbed to madness after the apocalypse, when in actual fact this was Amiba, a jealous rival of Toki who was impersonating him. The real Toki was imprisoned at Cassandra by Raoh, the eldest brother, who had taken the title Ken-Oh (拳王 King of Fists) and aimed to bring order to the world by force. With the help of Rei and Mamiya, Kenshiro toppled the great prison and was reunited with Toki. Toki would become a valuable ally to Kenshiro and intervened during his first fight with Raoh, as the two were on the verge of killing one another.

Kenshiro joined forces with Shu, leader of a guerrilla group against Souther, the Holy Emperor and master of Nanto Hōō Ken, who enslaved children to build his empire. Kenshiro was defeated by Souther when his vital point attacks had no effect on Souther's body. On the brink of death, Kenshiro was rescued by Shu's son, Shiva, who gave his life to aid his escape. However, in retaliation, Souther stormed the rebel hideout and had Shu executed at the summit of the Holy Pyramid. During their rematch, Kenshiro uncovered Souther's secret: the position of his heart and his vital points were reversed. Kenshiro took pity on Souther's tragic past and killed him with a merciful technique, bringing an end to the Holy Emperor's reign.

With the final battle with Raoh drawing closer, the mysterious Last Nanto General emerged to challenge Raoh's conquest. The Nanto General's real identity is revealed to be none other than Yuria, Kenshiro's betrothed. She had been saved by the Nanto Goshasei after attempting suicide at Shin's palace and her survival kept a secret to protect her from Raoh. Kenshiro fights Raoh using the ultimate Hokuto Shinken technique Musou Tensei, drawing on his profound sadness to make Raoh tremble in fear. However, Raoh kidnaps Yuria during his escape and prepares to kill the woman he loves if it will grant him the same power. Kenshiro and Raoh have their final battle at the Hokuto Renkitōza, with Raoh having killed Yuria to unlock Musou Tensei. Kenshiro's greater understanding of life and death gives him the edge over his older brother and leads him to victory. Yuria awakens after the battle, as Raoh had actually put her in a false state of death when he realized she was terminally ill. After Raoh's death, Kenshiro spends his next few years living in peace with Yuria, whose disease had been subdued by Raoh's power.

The latter half of the manga (and the corresponding Hokuto no Ken 2 anime adaptation) involves Kenshiro teaming up with the adult Bat and Lin, who have formed the Hokuto Army to oppose the tyrannical Jakou and his Imperial forces. The story eventually takes Kenshiro to his birthplace, the Land of Shura, where he learns of his heritage and fights against the warlords who oppress the land. This includes his estranged blood-brother, Hyoh, and the sinister Kaioh, Raoh's other blood-brother. The final story arcs of the manga (which were not adapted for the television series) see Kenshiro taking Raoh's orphaned son, Ryu, under his wing before continuing on his own where he settles the love triangle between himself, Bat and Lin. At the end, Kenshiro heads into the desert alone to fulfill his destiny as the Hokuto Shinken successor.

It is assumed that he eventually comes back to Ryu and trains him to become the next 65th Hokuto Shinken successor.

Although still emotionally repressed and stoic like many male heroes in 1980s media, Kenshirō is notable in manga/anime culture of the time for being a sensitive and kind-hearted man who broke the established "men don't cry" cultural stereotype. He is famous for openly lamenting, if not outright despairing over, the suffering of innocents and the deaths of his few noble enemies. He is also shown to be more openly unhinged on the rare occasions where he does get angry, and rather than deny or attempt to rationalize it, he fully accepts his rage and his wish for revenge, along with the motivation they give him, disregarding any moral ambiguity.

Kenshiro was voiced by Akira Kamiya in the TV series and 1986 movie, Ryō Horikawa voiced the child Kenshiro in flashbacks. The role of Kenshirō was recast to Takehito Koyasu in the 2003 OVA series New Fist of the North Star and then given to Kunihiro Kawamoto in the 2005 Fist of the North Star arcade game and the 2006 CG animated short film Hokuto no Ken: Legend of Heroes. In the Shin Kyūseishu Densetsu movie series, Kenshirō is voiced by Hiroshi Abe and by Eiji Hanawa as a child. For the Ten no Haoh PSP game, Kenshiro is voiced by Hideo Ishikawa. He is voiced by Katsuyuki Konishi in Hokuto Musou. In Hokuto ga Gotoku, a spinoff of the Yakuza series, Kenshiro is voiced by Takaya Kuroda.

English voice actors that have voiced Kenshirō includes John Vickery in the Streamline Pictures dub of the 1986 movie, Lex Lang in the Manga Entertainment dub of the TV series and Robert Kraft (voice actor) in the ADV Films dub of New Fist of the North Star. In the English version of Hokuto Musou (Fist of the North Star: Ken's Rage), he is played by Kaiji Tang. Robbie Daymond plays the role in Fist of The North Star: Lost Paradise (Hokuto Ga Gotoku). Gary Daniels played Kenshiro in the 1995 live action film.

In a survey conducted by the Oricon in 2007 between 1,000 people, Kenshiro ranked third place as the "strongest manga character of all time", behind only Son Goku and Doraemon who ranked first and second, respectively. [1]

A "wedding ceremony" for Kenshiro and Yuria was held at the Nippon Seinenkan on September 13, 2008, the date of the 25th anniversary of Fist of the North Star. Tetsuo Hara, Buronson, and other staff who worked on the series attended the ceremony planned by an actual wedding planner, with 3,000 fans applying for the 777 invitations that were available to fans via various outlets.

Translated from the 1986 magazine Hokuto no Ken Special: All About the Man. 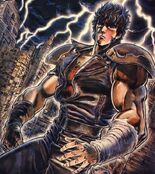 Kenshiro as he appears on the cover of Hokuto no Ken Vol. 1 (Jump Comics edition)

Kenshiro at the beginning of the manga

Kenshiro in the first three seasons of Hokuto no Ken

Kenshiro in the fourth and final season of Hokuto no Ken

Kenshiro in the beginning of the 1986 film.

Kenshiro as he appears later in the 1986 film.

Kenshiro in Hokuto no Ken 2.

Kenshiro overlooking in the manga 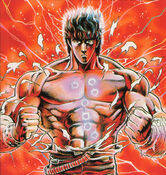 Kenshiro in Hokuto no Ken 3 for Family Computer, as depicted in regular battles.

Kenshiro in Hokuto no Ken 3 for Famicom, as depicted in boss battles.

Kenshiro in Hokuto no Ken 4 for Family Computer.

Kenshiro in Hokuto no Ken 5 for Super Famicom.

Kenshiro in Hokuto no Ken 6 for Super Famicom (face shot). 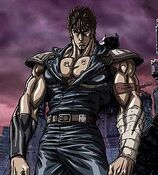 Kenshiro in Fist of the North Star: Legend of Raoh - Chapter of Love in Death

the spirit that appears to help Kenshiro during his fight with Kaioh.

Kenshiro in the pilot manga.

Kenshiro with a beard.

Kenshiro's brief clash with Shin in the 1986 film.

Ken in Jibo no Hoshi. 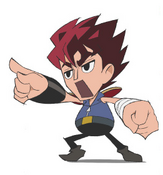 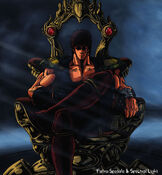 Kenshiro in a tuxedo. 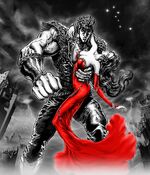 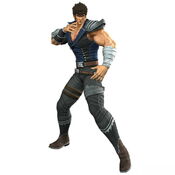 Kenshirō in J-Stars Victory Vs 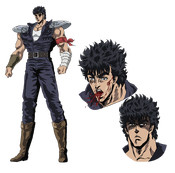 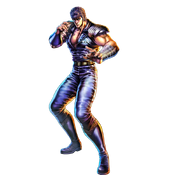 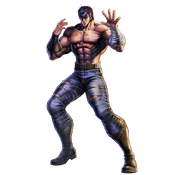 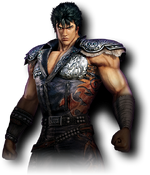 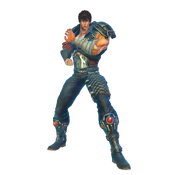 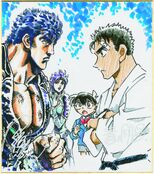 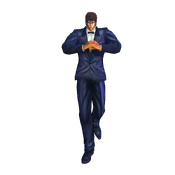