Kaioh (カイオウ, Kaiō)
Kaioh is the First Rashō (羅将, lit. supreme leader) that rules over the Land of Asura. He is sometimes referred as the Creator of the New Century (新世紀創造主, Shin Seiki Sōzōshu) or the Demon Kaioh (魔神カイオウ, Majin Kaiō). At first, his face is concealed in an iron helmet, but later he removes it to reveal his striking resemblance to Raoh, albeit with a "⅄"-shaped scar which covers his face.

Kaioh is in fact the long-lost older brother of Raoh and Toki, who remained in Asura while his two brothers left the country with Kenshiro. He wears a special armor that keeps his demonic aura focused. He hates the Hokuto Sōke ruling line and all it stands for, due to the fact that he was forced by Jūkei to lose his sparring matches with Hyoh as a child to encourage him, despite the fact that Kaiō was a more gifted fighter. Kaioh began losing his humanity when his mother sacrificed her life to save a baby Kenshiro from a burning building. Because of the immense pain of his mother's death, Kaioh vowed to never feel emotions again. To accomplish this goal, Kaioh began cutting or stabbing himself whenever he felt sadness as a form of negative reinforcement. Because of this, Kaioh ended up with countless scars all over his body as an adult.

Kaioh is the last and most powerful major antagonist in the manga and Kenshiro's final opponent in the TV series. After his defeat to Kenshiro, Kaioh reconciles with the dying Hyoh, and buries himself in a flux of lava, creating a statue of him holding Hyoh in his arms. 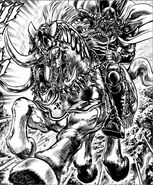 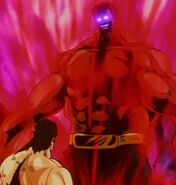 Ken and Kaioh, in their final battle

Kaioh cries for the first time in years 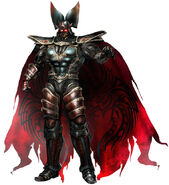 Kaioh displays his scars
Add a photo to this gallery
Retrieved from "https://hokuto.fandom.com/wiki/Kaioh?oldid=27323"
Community content is available under CC-BY-SA unless otherwise noted.