Juza of the Clouds (雲のジュウザ, Kumo no Jūza)
Juza is a member of the Nanto Goshasei (南斗五車星, "Five Chariot Stars of the South Dipper") and represents the wandering spirit of the Clouds. He has mastered a self-styled martial art (我流の拳, Garyū no Ken) and was considered the most gifted of the Goshasei.

Juza was Yuria's childhood sweetheart and wished to marry her, but his dreams were shattered when he discovered she was his half-sister from the same father. As a result, Juza descended into a hedonistic and promiscuous lifestyle to bury the pain. The Goshasei believed Juza was the only one capable of stopping Raoh, but Juza, being a free-spirited man, did not wish to fight for the sake of the Last Nanto General. When he discovered it was none other than his beloved Yuria, Juza swore his life to her and rode into battle against Raoh. Juza had known Raoh since childhood and was the perfect foil to Raoh's serious nature. Ryuken once remarked that the two of them were equals.
Juza was famously the first and only man to steal Kokuoh from Raoh. For this humiliation, Raoh refused to move until his mighty steed returned to him. When Juza returned for a rematch, he suffered the true extent of Raoh's strength and was defeated. However, he endured Raoh's torture to the bitter end and refused to identify the Last Nanto General. Raoh described Juza's death as 'terrifying' and ordered his men to prepare an honorable burial for his fallen rival. However, it was this same tenacity that revealed the Last Nanto General's identity to Raoh, as he knew that Juza would only sacrifice his life for Yuria.
In the television series, Juza has his own gang of punks, who effectively replace Fudou's army in the manga. Juza is captured by the Goshasei when Rihaku's daughter, Tou, infiltrates his hideout and spikes his drink before they take him to meet the Last Nanto General.
Juza's fight with Raoh is extended in this version. After surviving Raoh's interrogation, Juza evades the blow that killed him in the manga and continues fighting, despite his grievous wounds (he lampshades this turn of events by declaring "I'm of the clouds. I move and do as I please. We're doing this my way."). Eventually, he succumbs to one of Raoh's secret techniques and dies, only to rise up and continue battling Raoh for a few more moments. He manages to wound Raoh with a flying punch before finally exsanguinating from Raoh's previous attack. Raoh remarks that Juza's body had continued fighting even in death, and orders that his army give the fallen warrior a respectful burial.

Juza's side story details his life prior to his appearance in Hokuto no Ken. Juza is introduced as the trump card of an opposition army fighting against Raoh, and expresses a stronger playboy attitude than was shown in his appearances in Hokuto no Ken. Central to the plot is his search for Kenshiro, who Juza holds a grudge against for being unable to protect Yuria.
Juza leaves the opposition army after a junior member named Yan tells him about the leaders' plan to keep him there and that Cassandra has fallen. He eventually stumbles upon a village controlled by Raoh's army and governed by one of Raoh's officers Yona, and after a brief struggle, manages to free the village from the control of Raoh's army.
In a flashback, we learn that Juza never knew his father and his mother died when he was small. He was raised by the female owner of a brothel until Rihaku came looking for a boy with the star birthmark (on his waist) in order to become a Nanto Goshasei member. Juza would leave the training grounds because no one of the other members could match his strength and because he did not wish to fight for an unknown General. After getting food poisoning in the forest Juza was brought back in a weakened state. Bedridden, Juza would meet Yuria for the first time and open up emotionally.
Hyui and Shuren track down Juza to a brothel and have a duel hoping to convince him to return and fight for the Last Nanto General. Overpowered once again they follow him on his journey for a short time. Juza's brief reunion with his brother Ryuga turns sour after learning that Ryuga has forsaken his 'lone wolf' spirit and has chosen to follow Raoh. Juza battles Ryuga to a stalemate and Ryuga proclaims that their next meeting shall be fatal for one of them. After the battle, both Hyui and Shuren leave, entrusting destiny to hopefully persuade Juza to carry out his destiny.
Eventually, he stumbles across Mamiya's Village, and is surprised and subdued by Mamiya. Airi appears, and Juza realizes that Rei had died and recalls his tie with the Suichoken practitioner. When he brings up Kenshiro's inability to protect Yuria, he is slapped by Mamiya, who, Airi explains, was grieved by Rei's death and associated it with his inability to protect her. This causes Juza to let go of his grudge against Kenshiro and the events of Juza's appearance in Hokuto no Ken follow.

Juza in the anime

Juza in Shirogane no Seija 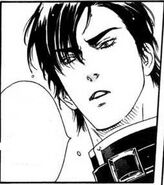 Juuza in Jibo no Hoshi 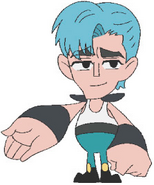 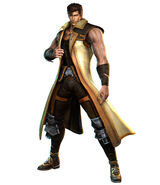 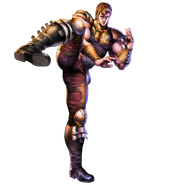 Juza in Hokuto no Ken: Legends ReVIVE
Add a photo to this gallery
Retrieved from "https://hokuto.fandom.com/wiki/Juza?oldid=29151"
Community content is available under CC-BY-SA unless otherwise noted.