Jagi (ジャギ) was the second youngest of the four Hokuto brothers, he was looked down on for his dirty tactics which demanded victory at any cost, such as relying on a shotgun or spitting needles. His desire to cheat was only rivaled by his contempt for Kenshiro, his younger adopted brother. Jagi believed that siblings must respect their elders and that it would be unforgivable for a younger brother to surpass him.

Upon hearing that Kenshiro was named successor, an outraged Jagi confronted him and ordered him to step down. When Kenshiro refused, Jagi tried to kill him but was defeated, only to be spared at the last moment. He escaped with a disfigured head, using metal implants to relieve the swelling and adopted a helmet to hide his now hideously deformed face. He exacted his revenge by manipulating Shin of the Nanto Koshū Ken into defeating Kenshiro and kidnapping his fiancée, Yuria. Shin had secretly loved Yuria, and Jagi convinced him that Kenshiro wasn't worthy of protecting her from the violent wasteland.

Jagi became a ruthless gang-leader, living only to hate his younger brother. His wounded pride and disfigured appearance made him paranoid and even caused him to murder his own minions in fits of rage. He attempted to defame Kenshiro by impersonating him, intentionally scarring himself to replicate the seven scars on his chest. He terrorized villages in Kenshiro's name, killed Rei's parents and kidnapped his younger sister Airi, selling her into slavery.

Kenshiro manages to track down his nemesis and the two of them fight atop the roof of Jagi's hideout. Much to his surprise, Jagi finds himself overcome by his younger brother's new ruthlessness. He uses the gasoline from the tank to set the roof ablaze but after Kenshiro learns that it was Jagi who turned Shin against him he demolishes the floor in his anger.

Jagi resorts to his own form of Nanto Seiken, which Kenshiro disparages as 'slow' and an insult to Shin's style. Kenshiro prolongs Jagi's death by dedicating four strikes to the victims of his evil schemes: Shin, Yuria, the two brothers Mako & Aki, and saves the final blow for his own rage. Kenshiro insists that an ugly death befits Jagi and watches as he is obliterated once and for all. However, before his death, Jagi couldn't resist one last parting shot, taunting Kenshiro that his other two brothers are still alive.

After his death, Jagi is usually unaccounted for in most instances where the 'Hokuto Brothers' are mentioned.

Jagi is portrayed as the first "son" adopted by Ryuken after his parents died in a fire. Ryuken never planned to teach him the art of Hokuto Shinken. After bringing Raoh and Toki, Jagi was extremely jealous that his father had adopted more "sons", and not only that, but also quite annoyed that his father refused to teach him Hokuto Shinken. Jagi fled the temple, and by chance ran into Boss and his gang of bikers, including Anna. Jagi spent time with them, and then returned to Hokuto Renkitoza, where, without Ryuken's approval, he started training on his own.

Jagi has a more extended appearance in the 1986 movie. He and Raoh witness Kenshiro's defeat and torture at the hands of Shin, who kidnaps Yuria. Raoh orders Jagi to dispose of Kenshiro's unconscious body by throwing him off the cliff so he can perish in the depths of darkness, and allows Jagi to become Hokuto Shinken successor in Kenshiro's place.

A year later, Jagi keeps Rei's sister, Airi, as his slave but soon realizes Kenshiro is still alive. When Kenshiro and Rei arrive at his fortress, he tries to trick Rei into attacking Kenshiro but Kenshiro immediately stops the fight and provokes Jagi into battle. The two Hokuto brothers fight upon the roof and during the fight Jagi reveals it was him who goaded Shin into taking Yuria.  Enraged by this, Kenshiro unleashes his fury upon Jagi and his punch destroys the device supporting his disfigured head. He tells Kenshiro of Yuria and Shin's whereabouts before his entire body explodes.

Jagi, before he was disfigured by Kenshiro 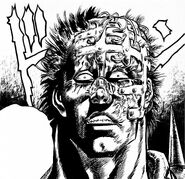 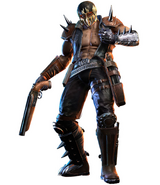 Jagi in the TV animated series

concept artwork for Jagi as a boy in the TV series 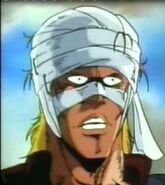 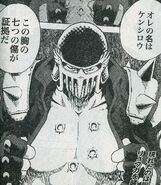 Jagi in Ten no Haoh 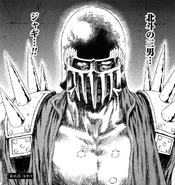 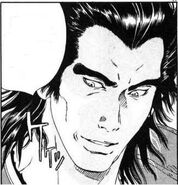 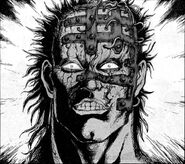 Jagi unmasked in the TV series. 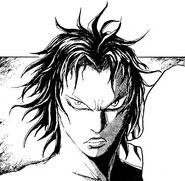 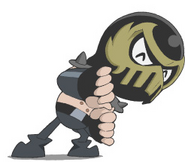 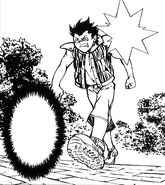 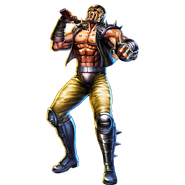 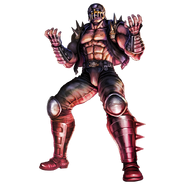 Wicked Inferno Jagi in Hokuto no Ken: Legends ReVIVE (illustration)
Add a photo to this gallery
Retrieved from "https://hokuto.fandom.com/wiki/Jagi?oldid=29482"
Community content is available under CC-BY-SA unless otherwise noted.