Heart is one of the Four Chief Vassals of the King Organization led by Shin, along with Spade, Diamond, and Club. A hulking fat man, Heart's stomach was composed of a rubber-like substance which absorbs the impact of most martial art techniques, earning him the nickname The Destroyer of Fists (拳法殺し, Kenpō Koroshi). It was said that only Nanto Seiken was capable of defeating him through brute force.

While normally calm and more merciful than his fellow Kingsmen, his personality changes to that of a homicidal maniac at the sight of his own blood, such as when he murdered several of his own men and a bartender after pricking his hand on a shard of broken glass.

He is a hulking man of impressive height who possesses a muscular & fat build, a bald head, and a Fu Manchu mustache, as well as a group of vertical scars of unknown origin located on his forehead. Like the rest of the Four Chief Vassals of KING, he has a tattoo of the letter K (changed to J in the anime) above his namesake suit.

He dresses in a minimalist and simplistic fashion, as he wears no shirt, a pair of suspenders with spikes near the top (although he gains a pair of shoulder pads in his confrontation with Kenshiro), a pair of leather vambraces with spikes, and a pair of boots with armored plates on the front.

He is normally a well-mannered, civil, and calm individual who speaks in a soft tone of voice in contrast to a great majority of the members of KING. He is kind enough to scold his own men for attacking a bartender, and politely let him continue his own work, and even told him to let him know if he and his men were bothering him with a cheerful smile. However, his civil nature will change completely if he sees his own blood, which causes him to uncontrollably enter a state of violent panic & anxiety that causes him to randomly start attacking and killing people, even if he was being friendly to them moments ago.

He possesses great strength, and great durability, stemming from his muscular build and rubber-like body, which allows him to absorb the impact of blunt attacks, trap weapons in his body for a counter attack where he launches them back at his enemies as projectiles, and even negate Hokuto Shin Ken's ability to destroy enemies from the inside under most scenarios. However, by his own admission, he is vulnerable to Nanto Seiken as it focuses on destroying enemies from the outside, and is also not presumably not immune to blades as well, as some broken bottles and a high-velocity feather were able to draw blood from him.

In Hokuto Musou, he is depicted as possessing the power to expand parts of his body like his hand or his belly, as well as being able to breath fire.

Heart was once a sickly young teenager of 14 called Alfred who ate very little and spent all his time indoors with his pet birds. Alfred was taken care of by his big sister, Sarah, who often encouraged Alfred to eat and work out more. However one day, Alfred's house was broken into by two criminals and Alfred was kidnapped with the intent of being held for ransom.

Sarah manages to follow the escaping criminals and engages them with a fencing sword, in the confusion, the kidnappers accidentally grievously wounded Sarah, splattering Alfred with her blood(giving Alfred haemophobia in the process), as she tells him to be big and strong. Realizing their ransom plot is now a failure, the kidnappers decide to kill Alfred, but they are instantly killed by a teenage Shin.

Shin advises Alfred that everyone needs to be strong and stand up for themselves. Following his sister's last wishes and Shin's advice, Alfred resolves to become big and strong, eventually over the years bulking his body to a behemoth size and creating the Kenpo Goroshi style.

He was present when Shin announced that Lady Eva was dead. Then, he follow his lord to see the confrontation between Rei and Rofu.

Heart fought Kenshiro within Shin's palace at Southern Cross as the last of the Four Lieutenants. Heart would normally be immune to the effects of Hokuto Shin Ken, but using the Hokuto Jūha Zan technique, Kenshiro was able to penetrate Heart's flesh and cause his body to explode. His iconic death cry was "HIDEBU", a corruption of Iteyo ("It hurts").
In the television series, Heart along with the other three lieutenants are addressed as the "Four Jacks", with Heart being addressed as "Heart J". Thus, the "K♥" tattoo on his forehead is replaced by a "J♥" tattoo. He speaks in an effeminate manner when in "calm" mode, but masculine when in "crazed" mode. The battle between him and Kenshiro is set near a valley, in which Heart orders his troops to slaughter a group of escapees from a nearby prison leaving them gravely wounded shortly before fighting Ken. Instead of Shin, it is Joker who watches the fight and throws a playing card which cuts Heart's face, sending him into a momentary frenzy before Kenshiro kills him.

In the 1986 movie, Heart's role is changed to being a henchmen of Jagi along with Fox and Jackal. In an early movie trailer, his name appears listed as Elephant (エレファント, Erefanto) to go with the naming theme of the Warriors gang. Confronting Kenshiro already in his berserk state, this time at Jagi's hideout, Heart is once again killed by Kenshirō.

Heart is a common sight in video games based on the series and is frequently depicted as Shin's most loyal henchman. In games with more then one playable character, Heart often fills the role of the strong and slow "Tank" character.

Hokuto no Ken - Violence Gekiga Adventure, the first game made, features Mr. Heart who uniquely uses a bow and smokes a cigar.

Hokuto no Ken for the Master System has Heart as the 4th miniboss in the first stage. In the Black Belt localization, Heart is given a kung fu uniform and renamed a Kung Fu Master.

Hokuto No Ken for Famicom features Heart as the first boss character, the guide revealing they decided to use Heart over Uighur. Interestingly unused material in the game shows Heart was supposed to finish the player with a move called Assatsu.

Hokuto no Ken 3 has Heart as a boss character who must be weakened by the Jūha Zan technique to be defeated.

Fist of the North Star: 10 Big Brawls for the King of Universe​, the first fighting game, released for gameboy, has Heart as one of the 11 fighters. Heart is one of the larger characters along with Uighur and tackles his opponent instead of kicking. If Heart is not chosen, he is the first opponent in normal mode, his arena being KING palace entrance.

Hokuto no Ken 5 , the next RPG, keeps Heart as a boss character early in the game. In this version of the story having taken over KING following Shin's disappearance.

Hokuto no Ken 6, the first fighting game for SNES, has Heart as one of the 8 playable fighters in the game.

Hokuto no Ken 7, the second fighting game for SNES has Heart as an unplayable boss character.

Heart is the first big boss in Fist of the North Star: The Legendary Messiah for playstation. If Heart is beaten without continues, he is unlocked as a character in the VS mode.

The first Punch Mania: Hokuto no Ken features Heart as a boss character. In the second, Heart is also a playable character in the VS multiplayer for 2 arcade cabinents.

All games in the Hokuto no Ken Gekiuchi series feature Heart as a boss.

The arcade fighting game, Fist of the North Star: The Twin Blue Stars of Judgment has Heart among the 10 playable characters.

Hokuto Musou has Heart as a boss and NPC character in the base game. However, Heart is a full playable character with DLC with a moveset. Heart has the highest raw power stat of the playable cast and his moveset allows him to lure enemies for crowd control attacks.

Shin Hokuto Musou now has Heart as a character in the base game. Heart's height has increased, he is now taller than Raoh for example.

Heart in the TV series

Heart on a rampage to Kenshiro after seeing his blood.

Heart in the manga

The offending "slaughterhouse" line by Kenshiro and its censored variants. 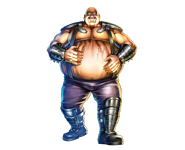 Heart in Hokuto no Ken: Legends ReVIVE (illustration)
Add a photo to this gallery

Retrieved from "https://hokuto.fandom.com/wiki/Heart?oldid=29147"
Community content is available under CC-BY-SA unless otherwise noted.