When Kenshiro and Rei enter Yuda's castle to confront him, they meet Dagar, who mocks them and reveals that Yuda has already left for Blue Town. He attempts to attack Kenshiro, but is quickly subdued when Ken strikes a vital point that causes him to feel intense pain for the rest of his life.

After Ken and Rei leave the castle, Dagar is left writhing in agony and murders two of his own minions in an uncontrollable frenzy. Yuda comes out of hiding and reveals that he secretly witnessed the fight and lied about visiting Blue Town because he knew that Kenshiro would make Dagar give away his location. Feeling betrayed and used as a pawn, Dagar attacks his master, but Yuda scoffs at his arrogance and splits him in half with his Nanto Kōkaku Ken shock wave technique, Yōsō Hazan.

In Ten no Haoh, Dagar is in charge of training Yuda's dolls to be assassins to kill rival warlords. When the UD Gang captures Reina, Dagar attempts to turn her into an assassin for the gang. Once Yuda makes his intention to ally with Raoh clear, Dagar releases Reina to Raoh and claims he was acting against Yuda's orders to cover his boss.
In Sōkoku no Garō, Dagar and Yuda watch the battle between Rei and Rofū, commenting on the destructive techniques.

The Fighting game, Hokuto no Ken: Shinpan no Sōsōsei: Kengō Retsuden has Dagar playing a major role as an assist character for Yuda alongside Komaku. Dagar can be summoned for various attacks and can also be used as a human shield for Yuda. However if Dagar is used as a human shield too much, he will attack his master. Yuda can either take this damage, block the damage, or kill Dagar to fill his special bar in exchange for being unable to summon Dagar for the rest of the round. If Dagar isn't killed, he will act normally the next time he is summoned. Dagar's palette changes to match the current palette chosen for Yuda.
Dagar appears as a boss in Hokuto no Ken - Seikimatsu Kyūseishu Densetsu for playstation, acting in the same story as the manga. As Tōru Furusawa didn't reprise his role, Dagar was voiced by Kōji Haramaki. Contrary to the manga and anime, Dagar was a very difficult opponent for the player, Dagar's powerful spinning attack often shielding him from Kenshiro's blows.
Shin Hokuto Muso features Dagar as a generic nanto general under the name Yuda's lieutenant. He appears in Legend mode retelling of the manga and in various dream mode as Yuda's assistant.

Dagar in the TV series 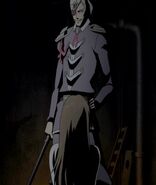 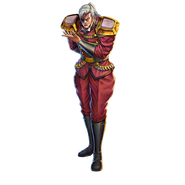 Dagar in Hokuto no Ken: Legends ReVIVE (illustration)
Add a photo to this gallery
Retrieved from "https://hokuto.fandom.com/wiki/Dagar?oldid=29109"
Community content is available under CC-BY-SA unless otherwise noted.