Colonel (, Kāneru)
The founder of the Golan organization and a former Red Beret commando. The Colonel was a master of different killing techniques, such as deadly boomerangs and the Nanto Muon Ken style. It was also stated by Mad Sarge that he possessed ESP (extrasensory perception), but in fact it was the ability to read the subtle muscle and eye movements of his opponent. Kenshiro detected this before defeating him.

The Colonel was once a patriotic soldier prior to the apocalypse. However, he lost faith in his country when he witnessed the debauchery committed by his superiors, whose arrogance plunged the world into nuclear war. After surviving the fallout, although he lost his right eye in the process, the Colonel and his men believed they were 'chosen by God' and aimed to repopulate the world with their own master race which would right the wrongs of the past. Kenshiro defeats the Golan in his quest to rescue Lin and fights the Colonel, first taking out his eyesight using the pressure point Dōmei and then destroying him with the Hokuto Kaikotsu Ken technique, causing his skeleton to explode from his flesh.

In the TV series, due to political reasons, the Colonel and his army's backstory was removed and they were rewritten as fanatical worshipers of Shin. In an anime-only flashback, Colonel also killed a gang of 10 former professional wrestlers hired to kill him by bartender Johnny.

In the 1986 movie, the Colonel has a short cameo as one of Shin's security officers. He is murdered by his master when focusing on Raoh's invasion instead of searching for the escaped Yuria. 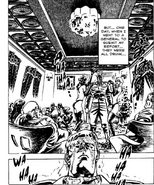 The Colonel, before the nuclear war, reported to his uncaring and callous superior. He still had his eyes intact at this time.

The Colonel in the TV series

The Colonel in Shin Hokuto Musou 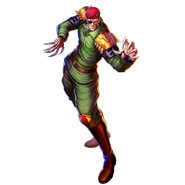 The Colonel in Hokuto no Ken: Legends ReVIVE (illustration)
Add a photo to this gallery
Retrieved from "https://hokuto.fandom.com/wiki/Colonel?oldid=29104"
Community content is available under CC-BY-SA unless otherwise noted.