Club (クラブ, Kurabu)
A minion of Shin who fought using long steel claws. Determined to get revenge for Diamond's death to Kenshiro, Club practised his brutal Tōrō Ken fighting style on captured peasant men after challenging them to one-sided death-matches his arena in Southern Cross. In the anime, he fights caged matches against anyone who tries to escape Dorado City. Kenshiro kills him by striking the vital point Meimon (Gate of Life), which snaps his spine in half.

Club makes a brief appearance in Ten no Haoh when Reina and Ryuga go to Southern Cross to kill KING. Club attacks Ryuga with his claws, but Ryuga easily defeats him. However, as Ryuga is about to kill Club, Juza intervenes and Club realizing he is outmatched, takes this opportunity to retreat.

Club and Diamond starred in the short story Recollection of Heavy Metal. It is revealed that the two were members of a heavy metal band and that Club's real name is Kōhei Shimatani (島谷こうへい).

Club in the TV series

Club in Hokuto no Ken 3

Club in Ten no Haoh

Kōhei (Club) with Takashi (Diamond) in Recollections of Heavy Metal 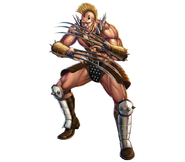 Club in Hokuto no Ken: Legends ReVIVE (illustration)
Add a photo to this gallery
Retrieved from "https://hokuto.fandom.com/wiki/Club?oldid=28534"
Community content is available under CC-BY-SA unless otherwise noted.