Bat (バット, Batto)
Bat is a young thief who follows Kenshiro on his journey, believing he can use his strength as a means to survive in the harsh wasteland.

It turns out that Bat originally left the home of his adoptive family so that his mother Toyo could take care of the younger orphans. Bat becomes Kenshiro's self-appointed sidekick, and although he is initially a brash, insensitive kid, having been exposed to the violence of the post-war era, Bat grows into a mature companion. He proves to have his uses, with his ability for fixing gadgets and driving the dune buggy that he uses to traverse the wasteland, and his tricky character allows him to get out of sticky situations. During their adventures, Bat develops a fondness for Lin and watches over her like a big brother. He also looks up to Kenshiro and witnesses many great battles throughout the series.

Bat later becomes the leader of the Hokuto Army - a resistance movement who fight against the corrupt Imperial Forces and its leader, Jakou. He also finds himself falling in love with Lin, who fights by his side. When Lin is kidnapped and taken to the Land of Asura, Bat secretly follows Kenshiro to save her. Lin is rescued, however, the Shikanhaku (死環白) pressure point inflicted by Kaioh causes her to fall in love with the first person she sees. Bat is prepared to let her fall in love with Kenshiro, but he continues his journey, leaving Lin with Bat, insisting that only he can make her happy.

During the final arc of the manga, we discover Bat and Lin became a couple, but after their wedding day, Bat was overcome with guilt and refused to live a lie and used his limited knowledge of Hokuto Shinken to erase Lin's memory. When Bat discovers Kenshiro is also suffering with amnesia after a thunderstorm, he arranges for the two of them to be together, while he fights Bolge, a vengeful enemy from Kenshiro's past. Kenshirō and Lin recover their memories but they are too late to save Bat, who has been slaughtered during the fight. When Bolge tries to take Lin with him, Bat uses his last ounce of strength to kill him. Bat makes a dying wish that Kenshiro and Lin be together and the two oblige. However, Lin has a change of heart and returns to the (presumed) dead Bat, only to find he has been revived by Kenshiro's powers. He and Lin live the rest of their life as husband and wife while Ken leaves them to their own happiness.

Bat (as a child) in the manga. 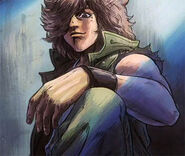 Bat and Lyn in HNK2 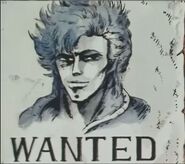 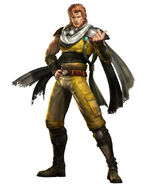 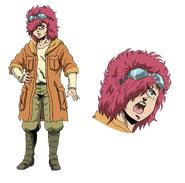 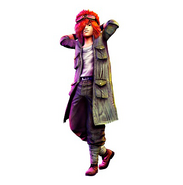 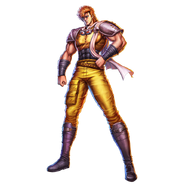 Young Wolf Bat in Hokuto no Ken: Legends ReVIVE (illustration)
Add a photo to this gallery
Retrieved from "https://hokuto.fandom.com/wiki/Bat?oldid=29161"
Community content is available under CC-BY-SA unless otherwise noted.