Rei's younger sister. On the day of her wedding, her parents were killed by Jagi and she was kidnapped and sold into slavery. She could not withstand the horrors she had witnessed and rendered herself blind by pouring poison into her eyes. The Fang Clan manage to steal her from her current owner and use her as a leverage against Rei, but she is saved through Rei and Kenshiro's combined efforts. After the Fang King is defeated, Kenshiro cures Airi of her blindness.

Due to Lin's bravery in the face of adversity against Ken-Oh's Invasion Squad, Airi becomes a strong and independent woman. She takes up arms against Gallon and his men, killing several of them armed with a crossbow. After Rei's death she remains at Mamiya's Village to look after her brother's grave.

In the theatrical movie, Jagi keeps her as his slave, and she is said to have become blind after seeing Jagi's hideous face. She is saved by Kenshiro and Rei, and her vision is restored thanks to Lin. Airi is unaccounted for during the rest of the movie.

Airi is mentioned to have stayed in Asgarzul by Eva to Rei at some point before departing.

Airi and Mamiya in HNK2.

Airi in the anime

Airi is cured of her blindness by Kenshiro. 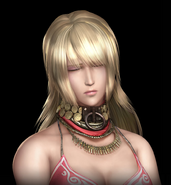 Airi in Hokuto ga Gotoku
Add a photo to this gallery
Retrieved from "https://hokuto.fandom.com/wiki/Airi?oldid=28812"
Community content is available under CC-BY-SA unless otherwise noted.